Talk about how to clean embroidered towels

2. Towel becomes hard: pour in boiling water, one cup of white vinegar and one cup of baking soda in the basin, stir evenly. Soak for 1 hour. Scrub the towel with white vinegar water and finally rinse neatly on it. The actual effect of softening white vinegar is stronger than the softener oh~ 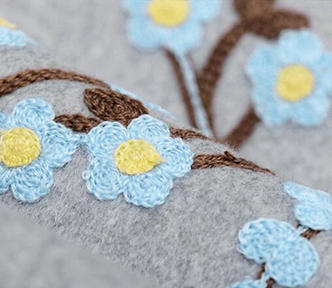 3. Towel odor: add the right amount of washing powder and boiling water in the basin, put the towel into the basin and soak for two days. Scrub the towel neatly and hang it to dry.

Embroidered towels are objects that touch people's human skin, so they need to be fixed for a period of time to clean up the germs, so as to ensure that the towels are neat and fresh, not only for the towels, bedside utensils to clean up on time, so as to ensure that the skin is not easy to touch the germs, which can cause skin diseases skin allergies these.
PREV：What are the functions of the computerized embroidery machine?NEXT：What are the fabrics of computer embroidery and flat embroidery?
Recommend Products