Color embroidery generally refers to the embroidery technique of controlling patterns with various colored embroidery threads. Color embroidery is also very rich in color changes. It uses thread as a substitute to produce gorgeous color effects through the overlapping, juxtaposition and interlacing of various colored embroidery threads. In particular, the trocar stitch method is the most distinctive in expressing the subtle changes of pattern colors, and the colors are blended in shades of light and have the rendering effect of traditional Chinese painting.


The main feature of stalk embroidery is to first use a thicker thread as a base or use cotton as a base to make the pattern rise, and then embroider with embroidery thread, generally using flat embroidery stitches. The stalk embroidery pattern is beautiful and elegant, full of three-dimensional sense and strong decoration. It is also called high embroidery, and in Suzhou embroidery, it is called convex embroidery. Boundless embroidery is suitable for embroidering small-sized patterns and narrow-petaled flowers, such as chrysanthemums, plum blossoms, etc. It is generally embroidered with single-color threads.


Carving embroidery, also known as Lou Kong embroidery, is a kind of embroidery method with certain difficulty and unique effect. Its biggest feature is that in the embroidery process, holes are trimmed according to the pattern, and a variety of pattern combinations are embroidered in different ways in the cut holes, so that the embroidery surface has both free and easy real flowers, and beautiful flowers. The beautiful empty flowers in the play, the contrast between the virtual and the real, are full of fun. The embroidery is elegant and delicate. 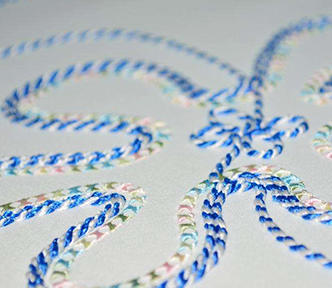 Nail thread embroidery, also known as pan stem embroidery or stick thread embroidery, is an embroidery method in which various ribbons and ropes are nailed and embroidered on clothing or textiles according to a certain pattern. Commonly used stitching methods include open stitching and dark stitching. The former stitches are exposed on the thread stem, and the latter is hidden in the thread stem. Nail thread embroidery is simple and has a long history. Its decorative style is elegant and generous. It has been widely used in kimonos in recent years. Sequin embroidery, also known as bead embroidery, is made of hollow beads, bead tubes, artificial gemstones, flashing sequins, etc., embroidered on clothing, computerized embroidery to produce jewels, dazzling effects, generally used in stage performances It is widely used in shoe uppers, handbags, jewelry boxes, etc. to increase the beauty and attractiveness of clothing.


Cross stitch, also known as cross peach blossom, is a traditional embroidery method widely spread among the people. The stitching method is very simple, that is, according to the warp and weft orientation of the fabric, the diagonal cross stitches of the same size are arranged into the pattern required by the design. Due to its stitching characteristics, the patterns of cross stitch are generally concise in shape, rigorous in structure, and often in a symmetrical pattern. There are also realistic-style patterns, and the themes are mostly natural flowers and plants. Cross stitch has a strong folk decorative style.


Belt embroidery, also known as flat belt embroidery, uses ribbon as embroidery thread to embroider directly on the fabric. The embroidery is a novel and unique form of kimono decoration, with soft luster, rich colors, eye-catching patterns and three-dimensional sense. Drawn embroidery is a very distinctive category in embroidery. The thread is regularly braided and tied, and the through-hole yarn eyes are woven into various patterns. The embroidered surface with artex embroidery has a unique mesh effect, beautiful and slender, transparent and highly decorative. Due to the difficulty of making through, most of the patterns of artex embroidery are simple geometric lines and blocks, which are delicately embellished in a piece of embroidery.


Poke yarn embroidery, also known as Najin, is one of the traditional forms of embroidery. It is embroidered on the computer embroidery base of gingham yarn strictly according to the number of grids. Poke yarn embroidery not only has beautiful patterns, but also has rich changes with the different arrangements of horizontal, straight and oblique lines, but the holes between the patterns must be aligned.
PREV：Computerized Embroidery Machine and Classification of Embroidery VarietiesNEXT：Color matching knowledge of computer embroidery thread
Recommend Products