Talking about the needle method of computer embroidery

Summary:Sometimes it is difficult to distinguish different embroidery stitches by eyes. The following is an enlarged pattern des...

Sometimes it is difficult to distinguish different embroidery stitches by eyes. The following is an enlarged pattern design of all stitches embroidered on a flat surface. All the needles are embroidered in one area, but if the picture is made for computer embroidery, it must include the number of needles required.

When the same pattern is designed with different stitches, the embroidery design will become more interesting. These stitches can be large or small, and they can be combined to embroider. These stitches only show one movement, the second movement and all the movements to complete the embroidery are assumed. Similarly, the pattern can be a little confusing, because all the stitches are drawn together, as if embroidering a single straight line.

This is a very narrow reciprocating stitch (Zigzag stitch). On the sketch, it may appear as a thin line, which can be straight or curved. Because the cut edge after narrow stitch stitching is firmer and stronger, it is often used for wrapping. Sometimes the scallop is wrapped with narrow stitches, and sometimes it strengthens the scallop with the stitches. It is safest to use narrow stitches on the edges after scissors cut, and it can also protect wider stitches. The dot-dash line in the figure represents the returned stitches, which are not drawn under normal circumstances.

When the narrow needles are tilted, fewer needles are required, and it is often used in flower stems and other designs.

It is a wide and narrow needle, often larger than 1/8" in width, and is also called a ribbon needle. It is often densely packed with a wide narrow needle, a vine leaf line, a dot or a part of a pattern. It is filled in one area, but there is only one stitch in the width. For these larger stitches, the embroidered part is tight at first, and then becomes looser. Embroidered embroidery often has a certain color and Luster, often used to decorate clothes or make accessories.

Single needle is an arbitrary form of needle method. It does not consider the direction, nor does it show the effect of narrow and close stitches, only lines can be seen, and the width is just the width of the line used. The seam on a suit or shirt is a single needle. Any kind of pattern design will not only use one stitch, unless it is the kind of effect you want. Single needles can be used as shadows, backgrounds or other effects. Because all the single needles are drawn on the sketch continuously, if the computer does not set the length of the single needle, a small mark is used in the figure to indicate its step length. When embroidering with coarse thread on light-weight fabrics or on heavier fabrics, the effect of using a single needle is very good, and it can design light and smooth patterns.

The base needle is a kind of stroke needle that cannot be seen in the finished embroidery. Some bottom threads have been stitched to the edge of the pattern or connected the various parts of the pattern into a whole during the pattern-making process. The bottom line also plays an important role in creating a three-dimensional effect.

When patterning the lace, sometimes there are more base stitches than the top stitches. Depending on the network structure of the bottom thread, the top stitches can form the overall pattern.

The primer shot can also be a shot. Adding another layer on top of the bottom stitch can make people feel the change in the appearance of the embroidery, and when embroidering stitches on it, it can produce a beautiful three-dimensional effect.

At least 5 single-needle threads can be used to form French dots. It is to place 5 threads on one another in a crisscross pattern to form embroidery with a certain thickness. Its appearance looks like a raised dot. The more needles, the more convex this point. In order to create a “stacking” effect when embroidering lace, small French points and slightly larger points are often superimposed. These points are usually odd-numbered needles so that the start and end points can fall on the same point. Use French point effects on medium-weight fabrics and laces.

The bean needle uses a needle to run the thread back and forth in any selected direction, and the last needle passes over itself and directly returns to its starting point. The more needles, the stronger the three-dimensional effect. In the design, they are often connected together to form various patterns to create various embroidery effects.

It is a kind of regular bean needle movement, several rows form an X shape or form a cross geometric pattern inside a square. This embroidery effect is very popular in women's shirts and is often used to imitate the farmer's embroidery style.

It often starts with a small dot in the center of the knot, half the size of the knot, and the bean needles around the periphery produce a raised effect, like a button. The starting point and the ending point must be at the same point, otherwise a coordinated pattern cannot be formed. It is best to use a French knot on a medium-weight fabric.

It is embroidered with narrow zigzag stitches on a series of single stitches to form a rough narrow stitch to guide cutting. It is often used to hang lace patterns continuously, and it can also be used as a base to form a lace background when embroidering lace. It produces a brisk effect and is generally not added to the basic lace pattern. 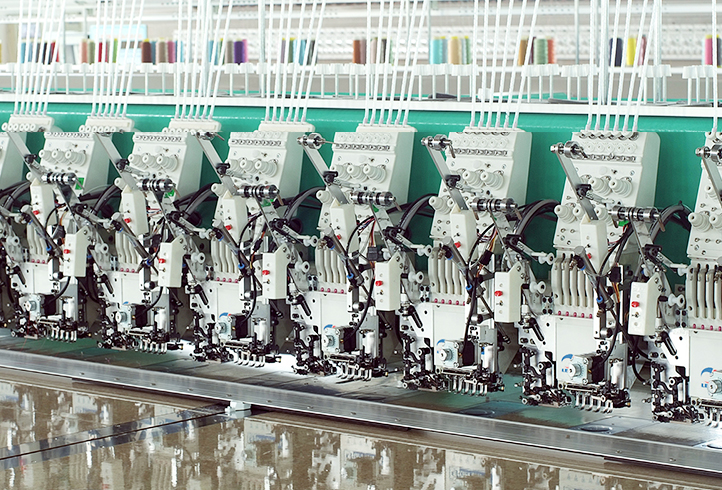 This needle is often used to reinforce the cut edge-it forms a strong edge on the cut edge created by the scissors. With this stitching method, it is possible to reduce the process of combining narrow stitches and stitch stitches when using separate narrow stitches for overburdening. When embroidering shadow stitches, make sure to make a base stitch.

This needle method is produced by combining needles with each other, which can create a strong sense of three-dimensionality. Firstly, the center point is embroidered, and then every 1/5 pattern is stitched separately. It is often used in band ornaments and lotus leaf trim. It is best to use it on medium and heavy fabrics.

This needle method is to use any basic needle method, such as a single needle without a bottom needle or a narrow needle, etc., screw to the center to form a spiral, and then move the needle between the needles just formed from the center, and return to The outer edge of the spiral.

This kind of needle consists of a series of bean needles with the same direction, and they are so densely arranged that the stroke needle connecting these bean needles is not visible. This kind of geometric stitching is used in the pattern design of many plants. Bean needles usually consist of 3, 5, and 7 movements. The embroideries formed by these dense stitches are very durable and are often used on shoes and handbags.

It is a needle method formed by a single needle in a certain geometric form, which can produce a variety of effects. Adding bean needles on it can form another pattern. Each fourth needle passes through the fourth needle point of the previous one and pulls the thread in the opposite direction to form a small hole. Like the first and second sketches, turn the pattern down so that it faces away so that 4 stitches in opposite directions pass through the same point. If the tension is right, a small hole can be formed. Embroidered on light fabric can decorate women's underwear.

It is often used to fill a certain area loosely. When the pattern is contoured with a single needle, then fill it with a filling needle to strengthen the contour. This stitch is often used on light fabrics, women's underwear, and quilts.

It is another form of single needle, which can be formed by repeating single needle with Cornely sewing machine. Embroidery on curtains and furniture fabrics with thicker threads is very beautiful.