1. According to the number of heads, it can be divided into single-head and multi-head machines (2-24 heads);

2. According to the number of needles contained in each end, it can be divided into single needle and multiple needles (3-12 needles);

3. In the form of feeding stretcher, it can be divided into plate type and cylinder type;

4. In the form of stitches used for embroidery, it is divided into lock stitches (301 stitches) and chain stitches (101 stitches).

Since each model has the number of machine heads, the number of needles, the form of the stretcher and the form of stitches, these are combined, arranged and classified, and the embroidery machine model will be a large number, so it can meet different needs. Customer needs of different levels, same scale and different requirements. 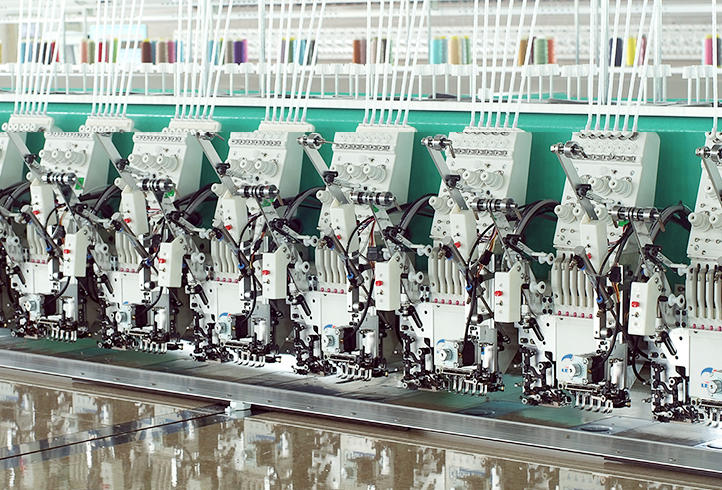 working principle
First, use embroidery CAD software to make a pattern, and after generating the pattern, put the discs containing the embroidery program and pattern into the computer disk drive respectively. The electric signal with the equivalent displacement is sent to the X, Y, and Z single-chip microcomputer system to process the speed of the motor, and then outputs the three-phase six-time signature. The power amplifier box of the line motor amplifies the power. The stretch frame completes the feeding movement between X and Y; at the same time, the Z stepping motor is driven to drive the needle to move up and down, so that the embroidery continues continuously.

The Z stepping motor drives the transmission mechanism of the machine head to rotate through the synchronous toothed belt, etc. The specific mechanism of the machine head makes the lead mechanism and the needle lead the upper thread to make and move down, and pierce the fabric; the hook in the hooking mechanism rotates to make The upper thread goes around the bobbin case where the lower thread is hidden; the thread take-up mechanism moves, conveys the upper thread, tightens the stitch, and prepares the upper thread segment for the next stitch. The X and Y stepping motors drive the silk frame and the fabric to move in a plane through the synchronous toothed belt and other mechanisms. Each stitch point to be embroidered on the fabric is sent to the machine needle for embroidery. The speed of the up and down movement of the machine needle is coordinated with the direction, amount of movement and movement speed of the stretcher frame, so that the upper thread and the lower thread are twisted and placed on the fabric. Make a double bartack. When the embroidery continues continuously, the computerized embroidery of the pattern is completed.

The pattern-making and embroidery software can quickly draw all kinds of graphics, and the file storage and reading speed is extremely fast. Large files of more than 200 megabytes (such as carpet patterns) can be read out in only a few tens of seconds. It can not only record the design itself, but also completely record all the information related to the design, such as back, net shape, mesh, pulp percentage, pattern category, etc., providing users with a relevant process, technology and management. The database of information has strong practicability. A compression ratio higher than 10 times is equivalent to multiplying the memory, allowing the system to overrun when the memory is insufficient. It can easily read out the extra large pattern that the general system cannot read, and the precision can be made higher. Because it is a full vector image operation, the image is rotated and enlarged with smooth borders and no aliasing, so ideal image quality and editing freedom can be obtained.

Computer embroidery has the function of intelligent filling of carved holes and the function of customizing tatami texture; whether it is a pattern made by the system or a foreign pattern, the density and width can be adjusted easily and accurately; it has a high-definition scanning input function, which greatly facilitates input Program; with automatic screen scrolling and calibration functions; with editing functions for single needle, block, color change, etc. and a perfect sub-sample system; with a friendly user interface, a pleasing screen working environment and the ability to switch between Chinese and English; flexible The system configuration method can configure the corresponding software and hardware according to the user's needs; because before the computer, the embroidery was done manually by the embroiderer looking at the picture, and there was a disadvantage that the embroidery products could not be unified. , and software engineers and mechanical engineering teamed up to complete the vast majority of repetitive embroidery in the computer, which greatly solved the problem of mass production and reduced labor costs.
PREV：What are the fabrics of computer embroidery and flat embroidery?NEXT：Basic knowledge needed to learn computer embroidery
Recommend Products